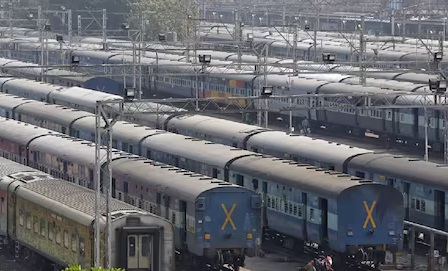 Pakistan Railways has restored more passenger trains after repairing and maintaining tracks badly damaged by heavy rains and subsequent flooding. The decision was made at the direction of Minister of Railways Khawaja Saad Rafiq to help passengers who have been terribly distressed by the unavailability of the train,” an official told APP on Sunday.

He said the track repair and maintenance work could not be fully completed, but the team worked day and night to restore the damaged tracks. Prior to the restoration of passenger trains on the entire line, test runs of inspection trains were carried out to confirm the maintenance and repair work on the tracks.

He said the minister has instructed the relevant authorities to complete the technical work as soon as possible and carry out the fumigation of the coaches. “Before resuming train service, he said the technical maintenance of coaches and workshops would also be repaired and handed over to operations,” he added.

Meanwhile, Pakistan Railways said that from 20 November, it will also resume operation of the Jafar Express from Peshawar Cantonment-Mach-Peshawar instead of the Baha Uddin Zakaria Express. The train ran between Quetta-Peshawar-Quetta, he said.

Officials said Pakistan had also restored the Jafar Express (Sukkur-Much) as the condition of the track on the section improved while track repairs were underway between Mach and Quetta.