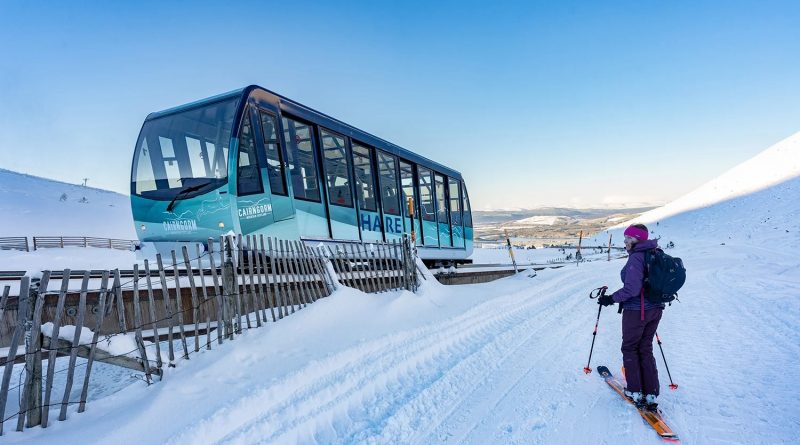 Snowsports enthusiasts can now ride the 2-kilometer route on a regular basis, which will take them there in around five minutes. Along with other significant development projects, the reinstatement of the railway will see the installation of new “magic carpet” conveyor belts for the novice slopes, car park upgrades, and renovations to the Ptarmigan building.

The only funicular train in Scotland and the highest in the UK, the Cairngorm Mountain Railway, rises more than 1,065 meters above sea level. In order to strengthen the viaduct and install a new control system as part of the reinstatement work, demanding environmental standards for a distinctive alpine environment have to be met.

“The Cairngorm Mountain team is happy to be welcoming snowsports enthusiasts onto the funicular railway once more,” said Susan Smith, CEO of CMS. We are so happy to see that the railway is now able to convey guests to the upper slopes thanks to upgrades made throughout the resort.

The resort, which is one of Scotland’s iconic places, is owned by Highlands and Islands Enterprise (HIE) and run by the Cairngorm Mountain team. The railway makes the mountain environment accessible to tourists of all ages and abilities throughout the year in addition to snowsports aficionados.

“It’s great to see the mountain railway operating once more. This will significantly enhance the visitor experience at Cairngorm and increase the region’s ability to draw tourists all year long, according to Dave Macleod, head of property and infrastructure at HIE.

“Restoring the funicular has presented a unique set of engineering challenges, not just in terms of the precautions that have to be taken to safeguard the environment during these works but also in dealing with some of the harshest and most unpredictable weather Scotland has to offer.”

Due to safety concerns, the Cairngorm Mountain Railway operation was discontinued in September 2018.