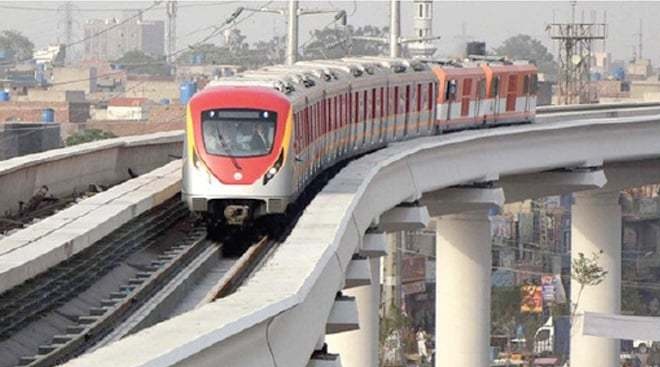 An Orange Line metro train arrives at a terminal in Lahore, Pakistan on December 29, 2021.

Built as part of the China-Pakistan Economic Corridor (CPEC) in the eastern Pakistan city of Lahore, the Orange Line Metro Train (OLMT) has brought about a very positive change in the life of Mehak Idrees, who takes the train several times a day.

Idrees is a mother of two and spends more than 35,000 Pakistani rupees ($158.10) a month on commuting. She only had to spend about 10,000 rupees for transportation costs after taking the metro line.

As a working woman, I need to travel a lot in the city, and OLMT gets me to the office on time every morning and gets me back to the kids after work quickly. It was always on time and provided a very comfortable and safe atmosphere for women with separate cabin where we could sit comfortably,” Idrees told Xinhua.

She added that the staff on board are also well trained and always ready to help.

Li Chen, general manager of Pakistan’s Lahore Metro Orange Line O&M Project, told Xinhua that the project has created more than 90,000 job opportunities for local people during the construction and operation phases of the project.

We have trained the first group of excellent local teams who can operate these metro lines independently…now all operation, maintenance and transportation work is done by local people and this is an amazing achievement,” added Li. Die The Orange Line’s punctuality rate is 99.99% for him.

An average of 120,000 people use the Orange Line every day. The Orange Line has 26 stations and runs a route of 17 miles (27 km), passing through areas where most of the city’s middle class live.

Trains start running at 6am every day. This is useful for students who want to save time and get to school easily with OLMT.

“During the morning rush hour, there was little traffic on the roads, and it took me more than 40 minutes to get to school. I was able to get there, so I had a chance to sleep more in the morning,” sixth grader Muhammad Hanan told Xinhua News Agency.

The 10-year-old boy said the train is centrally air-conditioned and offers a very comfortable ride.

Wakar Kayani, the principal of Hanan’s school, said many students at his school take the train every day, which has a very positive effect on the children’s health.

The train will also pass some of the city’s cultural attractions and historical sites, making the sights easily accessible for tourists and boosting tourism in the city, known as Pakistan’s cultural hub.

Li said the train is a microcosm of China-Pakistan friendship and economic cooperation under CPEC.

“The metro has connected China and Pakistan because the project has brought many job opportunities and people from both countries have worked on the project. You can feel it making things better,” said Li.